Who Is Kwan Yin?

Who Is Kwan Yin?

As an intuitive soul coach and spiritual mentor, much of my practice is done in the spiritual realm. I absolutely love working with spirit guides, and am always amazed by the seemingly infinite wisdom they have to share.

Over the past several weeks I have been preparing for my Spirit Guide Mentorship program, and I’ve been thinking a lot about the different guides with whom I have with over the years — both my own guides and those of my clients’.

There has been so much that I have learned from each of them, and each in their own unique way, but there is one guide in particular who stands out for me, so I thought I’d share a little about her with you. In fact, you’ve probably seen her around without even knowing it, as she is one of the most beloved and celebrated deities in Asian culture and the muse of many a painter and sculptor. Maybe you have even heard of her… 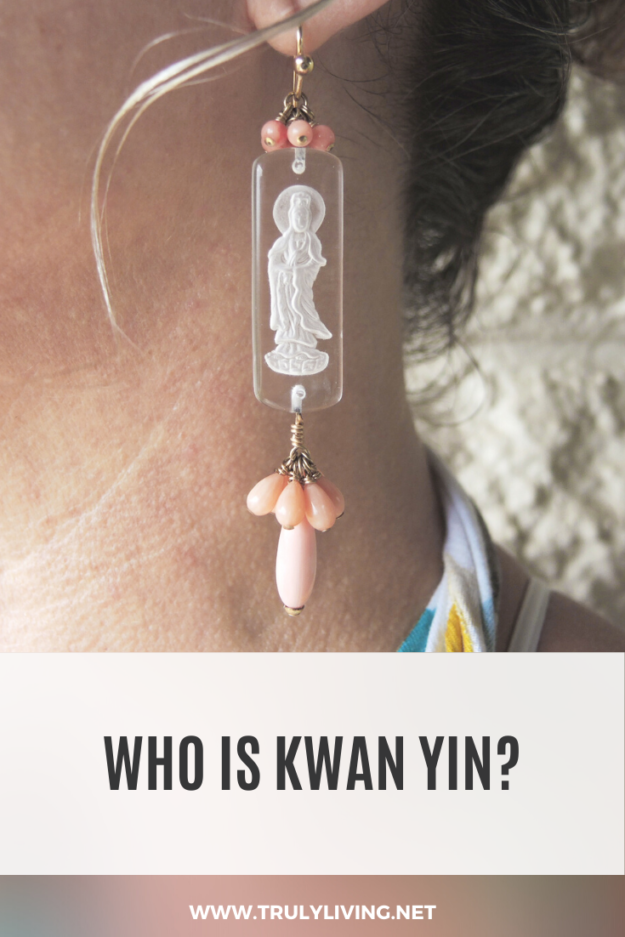 Kwan Yin is the quintessential mother goddess of compassion, mercy, and unconditional love, and she is also one of the most highly revered Buddhist bodhisattvas, or “enlightened beings.”

According to legend, Kwan Yin had actually been able to achieve Nirvana and was well on her path to Buddhahood. Upon hearing the cries of those in need around her, though, she chose to forgo her ascension and instead remain in physical form to commit herself in service of love and support until there is no longer human suffering and all sentient beings are finally freed from samsara, or the cycle of death and rebirth.

Fittingly, her Chinese name, Guan Shih Yin, translates to “she who hears the cries of the world.” She is the ultimate embodiment of empathy and grace, a fierce protector of women, children, and all who are sick, in pain, or impoverished, and attributed to many miracles in Asian legend.

A BRIEF HISTORY OF KWAN YIN

There is some debate over the origins of Kwan Yin, but it is generally accepted that she first appeared in India as the sanskrit Avalokitesvara, who was the male bodhisattva of compassion, as all bodhisattvas at the time were male.

Around the first century AD was when she was introduced to China as Kwun Yum, and later as Gwan-Eum in Korea. By the seventh century she had slowly made her way to Japan as Kannon (or Kanzeon) with the spread of Buddhism, as well as Thailand as Kuan Eim, Quan Am in Vietnam, and Kwan Im in Indonesia.

Around the twelfth or thirteenth century was when she began to emerge as female, and though she still sometimes takes on a somewhat androgynous form she is predominantly depicted as female today.

Kwan Yin is often likened to the mother goddess, Isis, in Egyptian culture, and Shakti in Hinduism. Most notably she is compared to the Mother Mary or Virgin Mary in Catholicism and Christianity, as they are both venerated for their mercy and kindness and considered to be manifestations of the divine feminine and worshipped as the divine mother.

HOW SHE IS DEPICTED

There are actually a number of Japanese depictions of Kwan Yin cloaked in a blue robe similar to that of the Mother Mary, though for the most part her robes are distinctly white as a symbol of her purity.

She typically holds a vase of healing water in her right hand, and either a sheaf of rice or a willow branch in her left to represent fertility, or sometimes a white or pink lotus flower as an emblem for peace and harmony.

Another iteration shows her with her hands cupped in the Yoni mudra to indicate the womb as our entrance into the physical world through the sacred feminine, while yet another shows her riding atop a dragon as a reminder of her great strength and power.

There are also images of her with several arms and heads, akin to the Hindu goddess Durga. As the story goes, Kwan Yin was given a thousand arms and a thousand heads and eyes so that she could see in all directions and offer a hand to all who reached for her in their time of need.

She is the subject of countless works of art, and her statue can be found everywhere from ancient temples and museums to modern restaurants and even Yoga studios.

There are a number of temples that have been erected entirely in dedication to her, for example the Goddess of Mercy Temple in Penong, Malaysia, or the Kwan Im Thong Hood Cho Temple in Singapore, as well as thousands of smaller meditation centers all around the world.

She is even a prominent element in Feng Shui, believed to bring good luck and protection to the home when kept close to the front door, or good health and harmony when kept in the well-being or love bagua — just be sure to keep her at least three feet above the floor!

As a goddess of compassion dedicated to aiding anyone in need, Kwan Yin is said to be one of the easiest spirits to work with as a guide.

Ever present and always listening to our prayers, there is no special ritual or method for calling on her. Some like to chant the sanskrit mantra of enlightenment when working with her — om mani padre hum — however a genuine request from the heart for her support and assistance is really all that is needed.

She is one of the best guides to work with when attuning to the divine feminine, and her gentle and nurturing energy make her the perfect advocate for cultivating compassion, forgiveness, and a deeper connection with others, as well as learning to truly love, embrace and care for oneself.

You may also call on her for protection, particularly in matters that have to do with children, for fertility blessings, practicing gratitude, and being more mindful of the beauty of life in general.

I became more familiar with Kwan Yin during my years in Hawaii.  The Asian immigrants brought their goddess with them to the islands and she’s seen more often there in a variety of forms than her comparison, the Virgin Mother Mary.  I love the peaceful quality of her representations, and began to look for a sculpture of Kwan Yin for my house.  It wasn’t a hunt; but rather a calling.  I thought if I called out to Kwan Yin asking her to reveal herself in just the right medium, I’d stumble upon it or be presented with it in divine time, and I was.  On a lazy day, I decided to go up to the shops as Holualoa and visited the vintage shop called Cinderella’s.  There was interesting mix of items for sale there from special vintage pieces of furniture, artworks, clothing, collectibles, cultural artifacts, and wonderful estate jewelry.  I browsed the earring collection, and there she was.  In the most unexpected of forms, etched on a small rectangular piece of glass dangling between sets of vintage coral beads on a pair of chandelier-like earrings.  There was no question I found Kwan Yin, and she presented herself in a form that I couldn’t refuse!  I feel completely naked in the world if I forget to wear a pair of earrings, so its rare that you’ll see me without a pair dangling from my ear lobes.  This vintage pair of earrings featuring Kwan yin was the perfect match, and I stopped by search for the sculpture.  It’s true.  When the student is ready, the teacher appears.

Research for this blog by Claire Del Grippo; editing and finishing touches by Lisa Rose.