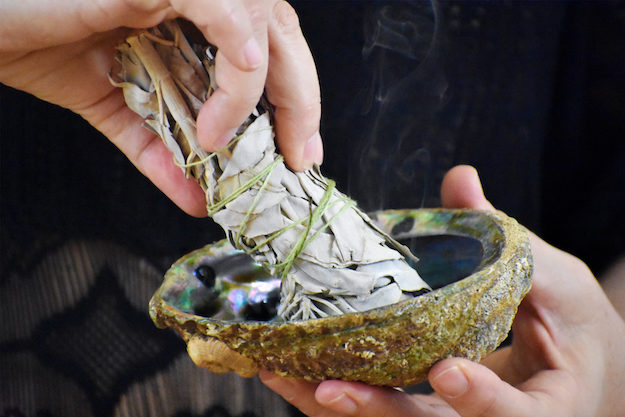 Healers from every culture have been using smoke to rid us of negative energy and physical ills alike. Smoke rituals can be traced as far back as 1530 BC in Egypt, used to deter malevolent demons and appease the gods. The Babylonians used smoke to offer prayers to divine oracles. From there, the trend spread to Greece, Rome and India where hindus and buddhists use it in ritual to this day. It is used in Catholicism as a symbolic rise to heaven. Despite its commonality, mainstream media doesn’t recognize the widespread uses of smoke to purify.

There are many materials used to produce smoke. Most people think of sage, but there are plenty of other options stemming from different cultural backgrounds, such as cedar, mugwort, frankincense, and palo santo. White sage is native to Southern California and can be found in pretty much any holistic shop nowadays. It’s used to “wash off” the outside world, ridding people and/or objects of unwanted influences. Cedar, a native to the Himalayan mountains and Mediterranean region, is burned for protection. It’s often used to cleanse a new home of unwanted spirits and protect it from unwanted entrance. Mugwort refers to several species of aromatic plants native to Asia. It is burned on particular parts of the body in a practice called Moxibustion to strengthen the blood, stimulate the flow of Qi and maintain general health. Many acupuncturists burn moxa to help rotate breech babies. Frankincense resin is produced by Boswellia trees found in the Arabian Peninsula and North Africa. The resin is converted into an essential oil used in aromatherapy, but you can also burn the resin on charcoal tablets. It is used to cleanse and protect the soul, and is known for easing depression and promoting clairvoyance. Palo Santo, which translates to “holy wood” in spanish, is a tree native to Mexico, Peru, and Venezuela but is also found in Costa Rica, El Salvador, Guatemala, Honduras, Columbia, Ecuador and on the Galapagos Islands. It is also used to purify the spirit and clear negative energy, but is also known to inspire creativity and aid in physical healing.

Sometimes people use tools during their smoke rituals. Indigenous people paired the elements, for example; sage represents earth, the abalone shell that cradles it represents water, matches represent fire, and a feather represents the air. Feathers are most commonly used to guide smoke. These elements can also be paired with drumming music, which represents the beat of the heart. Combining the elements help center the mind, similar to meditation.

If you decide to experiment with smoke, pay attention to which materials you use. Some store bought incense materials contain carbon monoxide, nitrogen oxides, or sulfur oxides. Research has linked the burning of incense sticks to a slow accumulation of carcinogens in environments with poor ventilation, leading to a higher risk of upper respiratory tract cancer and asthma. Fine particles that can pollute the air during a burning may also lead to irritation of the airways, so always make sure to practice smoke rituals safely with ventilation.

Whether you’re cleansing yourself, an object, or a place of bad juju, blessing, protecting, or healing, smoke rituals are a powerful tool that have been used for thousands of years. It’s hard to find a culture without one if you dig deep enough. We have the same resources as our ancestors had, and their ancestors had, but with so much more access to them and how to use them. Next time your intuition is setting off warning sirens, or the energy just feels wrong, follow the footsteps of those who brought us here and use smoke to purify. Just remember to open a window!

Written for my blog by Savannah Scheuerle.