The History & Uses of Incense

The History & Uses of Incense 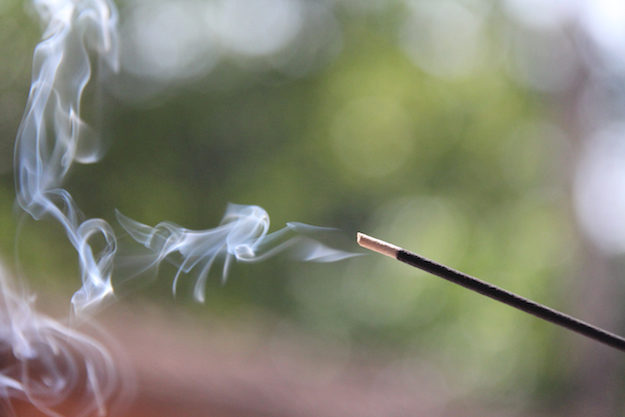 One way I love to relax is to lay in my bed, wrap myself in nice clean sheets, and light a stick of my favorite incense. Watching the ribbons of smoke unfurl into the air around me and breathing in the delightful aroma always helps me to feel present in my mind and centered in my body.  Sometimes I even like to use incense as a subtle method for timing my meditations so I don’t have to rely on an alarm to bring me back, which can be a  rather jarring transition.

Believe it or not, keeping track of time was actually one of incense’s original uses; Back in 6th century China, “incense clocks” were manufactured to track minutes, hours, and sometimes even days, threaded with weights that would drop to sound a bell or gong, or switch to a new stick with a different fragrance to signal that a certain amount of time had elapsed. These clocks were often crafted with elaborate, decorative trays, and were popular in homes and in temples alike. Even doctors were known to utilize incense in the treatment of their patients, often marking sticks at set intervals and instructing that medicine be taken every time the incense burned to a new mark.

The word incense comes from the Latin word, “incendere,” which means “to burn,” but incense is actually believed to have originated in ancient China. Eventually, Chinese Buddhist monks introduced their incense to Japan and parts of Korea, where it continued to spread and prompt what was called the Middle Eastern Incense Route, which stretched from Mediterranean ports in Egypt through north eastern Africa and all the way to Arabia and India between the 7th century BC and 2nd century AD. It was along that route, in Israel, that incense is thought to have been discovered by the Roman Empire.

Of course, incense grew to have many uses aside from keeping time. During the Ming Dynasty, China began producing incense sticks called “joss-sticks,” which were burned before an image or statue of the Buddha, or other sacred shrines, or as offerings at doors or open windows. Spiral incense with longer burning times were often hung from ceilings in temples to mask the smell of it’s masses, and in Traditional Chinese Medicine, each of the five elements were represented by specific fragrances — Star Anise for Ether; Sandalwood, Aloeswood, Cedarwood, Cassia, Frankincense or Myrrh for Water; Turmeric, Vetiver, Ginger, or Valerian for Earth; Cover for Fire; and Patchouli for Air.

In Japan, incense (or “koh”) became so popular that entire schools were created to teach  “Koh-Do,” or, “The Way of Incense.” This is where incense in cone form was invented. Samurai warriors were known to meditate with incense to prepare themselves for battle, and some say that they even perfumed their helmets and armor with incense as a ritual for invincibility. 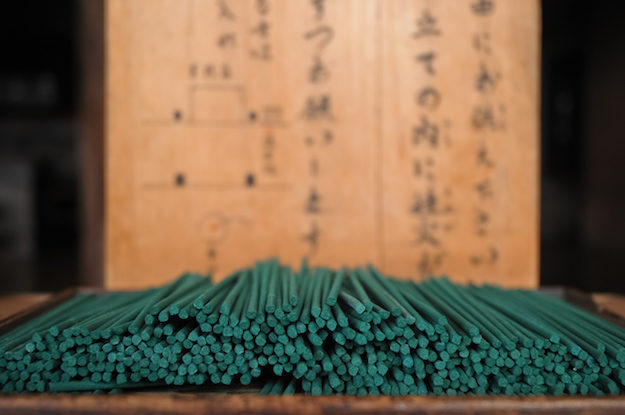 Incense was also widely used as an offering in prayer to the Gods and Goddesses, particularly by the Babylonians and in Ancient Egypt, and as part of funerary practices as well — whether to simply mask the smell of decay or in ritual. In fact, incense, along with other perfumes and scented oils, were found in Tutankhamun’s tomb, while up in the north, Vikings were known to burn incense in the boat graves of their deceased warriors.

Purification was another popular use for incense — in Ancient Greece it was burned to protect against demons and evil spirits, and Native Americans often used Sage to cleanse negative energy and create sacred space for ceremonies and blessings. Even in Christianity, incense — Frankincense in particular — is burned to symbolize the rising of prayers up to Heaven. Incidentally, Frankincense was one of the gifts brought to the baby Jesus by the Three Wisemen, along with Myrrh and gold, as Frankincense was at one point worth even more than silver and even used as currency.

Today, incense is of course still widely used, for spiritual practices, practical uses, or just because it smells good! A wonderful form of aromatherapy, incense can be used to calm anxiety, reduce stress, aid sleep, help focus, stimulate new energy, as an aphrodisiac, or to set the mood for meditation, yoga, or Reiki sessions. Jasmine in particular is known to ease depression, while Frankincense has actually been shown to activate certain parts of the brain that elevate mood. And, of course, you can burn Citronella to keep away mosquitoes and other pesky insects in the summer!

Personally, my favorite kind of incense is Japanese incense. Not only does it smell absolutely amazing, but Japan has very strict quality and health requirements, so you know you are getting incense made with the most natural and purest ingredients.

Not only that, but remember how I said the Japanese have perfected and practice the art of Koh-Do? Well, here are the Ten Virtues of Koh:

And there you have it — who can argue with that?! There is even proper etiquette for burning incense, for example, it is considered best to extinguish incense by waving your hand back and forth by the ember rather than simply blowing it out.

Traditionally, Japanese incense is made with just fragrant wood (usually Sandalwood or Agarwood), resin and essential oils, with a base made from the powdered bark of a tabu tree, which becomes clay-like when mixed with water. The incense is rolled into sticks and cut into equal lengths, then laid to dry on wooden trays in rooms where the temperature and humidity are meticulously controlled, and remain there for several days until they are hardened. Some of the top brands to look for are are Shoyeido, Nippon Kodo, and Baieido, which has been around since 1657 making it one of the oldest and still family run.

A quick word of caution — be sure that when you are burning incense, you are doing so in a well ventilated area. Dogs, cats and other domesticated animals have much more sensitive noses and lungs, and burning anything does of course release carbon monoxide into the air, which can irritate the lungs of animals and humans alike. Some health officials have argued that excessive use can put you at a higher risk for respiratory issues (and even certain cancers!) so, especially if you suffer from asthma or allergies, just be mindful of your incense use. Check the ingredients of your incense and make sure they are safe and natural, open some windows, and perhaps even pick up some air purifying plants like bamboo palms, spider plants, or peace lilies.

Written for my blog by Claire Elise.