Herkimer Diamonds, The Most Powerful Healing Crystal on Earth

Home/Intuition, Reiki/Herkimer Diamonds, The Most Powerful Healing Crystal on Earth
Previous Next

Herkimer Diamonds, The Most Powerful Healing Crystal on Earth 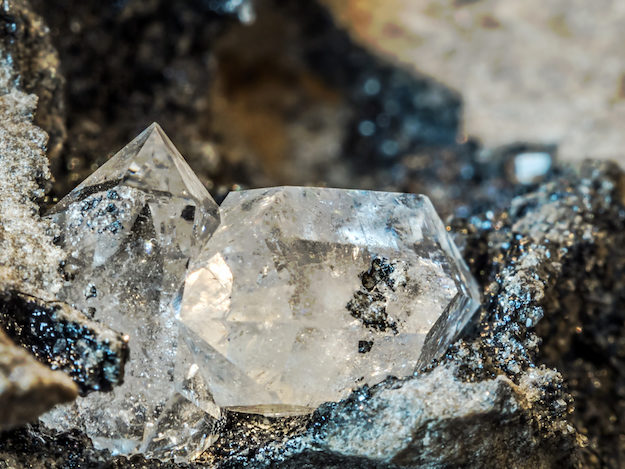 As many of you probably know, I love to incorporate healing crystals in my spiritual practice — whether I am clearing space with a crystal grid,  holding a crystal during meditation for grounding, focusing energy during a Reiki treatment by placing crystals on or around my client, or simply adding a little extra beauty to my environment — crystals are my go-to tool!

One of my absolute favorite crystals to work with is the Herkimer diamond.  I received my Herkimer diamond from my Reiki Master; it was a special gift.  Not only are Herkimers absolutely enchanting to look at, but they are considered by many to be the most powerful healing crystal on Earth.  They are one of the most highly valued and sought after crystals in the world by jewelers and healers alike.

While Herkimers share a similar geometric shape to a diamond and resemble their unique glint and sparkle, Herkimers are actually part of the quartz family. That said, Herkimers are typically brighter than regular quartz and rank higher on the Mohs Hardness Scale at 7.5, compared to quartz which ranks at 7. (Diamonds, the hardest rock on the planet, rank at 10.)

Herkimers get their name from Herkimer County, New York.  First discovered in the 18th century during an excavation in the Mohawk River Valley, New York is the only place where these crystals are found. Formed over 500 million years ago in free floating pockets of dolostone and bedrock, Herkimers are double terminated crystals, meaning both ends come to a natural point. They have 18 facets and can grow up to around 12”, though the majority are much smaller, measuring up to around 4”.

Most Herkimers are clear and colorless, though some resemble smokey quartz or have a rainbow-like incandescence when held in sunlight. Rarely, Herkimers contain air bubbles, deposits of coal, and decayed plant life from the Paleozoic era.

When it comes to elegance, Herkimers are on par with authentic diamonds and make exquisite jewelry — the Duchess of Sussex, Meghan Markle, is known to be a fan and has been seen wearing Herkimer earrings, rings and bracelets for special occasions. One of my friends received a beautiful Herkimer diamond set in an engagement ring!  Even luxury brands can’t resist the allure of Herkimers and embrace them in their marketing, like Dan Aykroyd’s Crystal Head Vodka, which boasts over 10,000 Herkimer crystals in their filtering process.

Because of their notably high vibration and double termination which allows them to push and pull or send and receive energy in both directions, Herkimers are also extremely popular in metaphysical communities and widely used in the healing arts. They are easily programmable for setting intentions and will magnify energy in crystal grids to create a pure and positive healing space. Commonly referred to as “attunement stones” in Reiki practice, these crystals are primed for aligning energy between the practitioner and client, as well as focusing and directing Reiki energy and amplifying the energy of other crystals used in combination with them.  When I perform crystaline Reiki, I often work with Herkimer diamonds as the central stone of a crystal grid.  Size doesn’t matter, in this case.  Small stones are capable of holding immense power and transmit it quickly.

Herkimers are known to ease physical pain and tension when placed on areas of the body that are afflicted, and for restoring equilibrium within the energy body by brining the physical, mental, emotional and spiritual states into harmony and unison. Their high frequency makes them powerful stones to use for clearing energy blockages and for balancing the chakras — particularly the higher chakras between the crown and heart — and for dissolving energetic cords with negative influences in your life.

Kept under a pillow, Herkimers can be used to alleviate insomnia, and paired with moldivite, Herkimers are known to enhance dreamwork. In fact, another popular nickname for these crystals is the “inner vision stone,” as they can heighten intuition, strengthen clairvoyance and clairaudience abilities, assist in connecting with spirit guides, and even aid in astral travel and soul retrieval.

The best part about these crystals is that they are actually quite affordable to purchase for your own collection! Small raw specimens can be found online on sites like Amazon, Etsy, HSN, and other private stores for under $20. Of course, just like diamonds, the price goes up from there depending on size, color, clarity, cut and carat weight, or when used in the design of a piece of jewelry. If you are looking for a Herkimer to use for your spiritual practice, keep in mind that the clearer the crystal is the purer the vibration.

And if you’re ever in New York, you can mine for them yourself at Herkimer Diamond Mines KOA Resort !

Have you used Herkimer diamonds before? What was your experience like?

Research and drafted by Claire Elise for my blog; finishing touches by me.