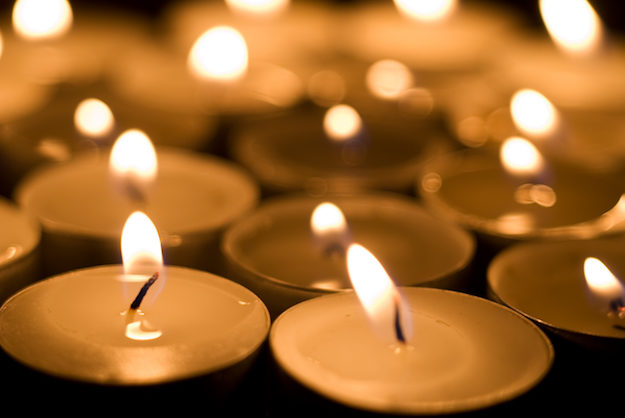 There’s no feeling more comforting than the one produced from the soft glow of a candle in a dark room. Whether it’s for decoration or scent, burning a candle is a timeless luxury most of us indulge to create a peaceful space away from the seemingly chaotic world around us. But what if this tool is damaging the air we breathe?

Most candles are made of paraffin wax, which is a solid derived from petroleum, coal, or oil shale. If you burn one for a long period of time, you might notice a dark stain on your wall afterwards. Why? Paraffin wax releases toxic carcinogens into the air akin to the chemicals in diesel fuel emissions. It can clog your pores, induce nausea, produce headaches and generate poor circulation. This is the same pollution that contributes to lung cancer. So much for breathing easy! What’s the alternative?

Beeswax. After it’s created naturally by bees to make honeycombs, it is melted into a soft solid for many uses, from beauty products to home features. When we use it on our bodies, it works wonders- healing, moisturizing and soothing skin. It also works wonders when we use it to tranquilize our spirits. When you melt beeswax and pour it into a glass with a wick, you get a lovely aerating candle. Beeswax candles produce negative ions that actually help neutralize pollutants in the air rather than contribute to them. They purify and cleanse, reducing dust, odors and mold in our atmosphere. They can ease allergies and asthma symptoms. Beeswax literally makes breathing easier!

Along with improving health, beeswax candles last longer and burn brighter. Although natural and organic products are more costly, beeswax has no shelf life, and the highest melting point of any wax. As a result, beeswax draws a burn that is up to five times longer and brighter than that of paraffin. If you can get up to nine hours of light from one ounce of paraffin, you can get almost two days of light out of an ounce of beeswax, with a brightness comparable to sunlight!

So how do you know if you’re buying the best beeswax? There’s no such thing as the “best candle maker” but it’s helpful to know what to look for when you’re buying a beeswax candle. Beeswax color varies based on where the hive is located, but as a general rule of thumb you should look for a candle with a deep golden hue. That being said, if you’re looking for a different color, you can still enjoy a beeswax candle. Beeswax can be colored using wax dye, plant based dye, food coloring or even crayons. Another way to tell if your candle is 100% beeswax is by the whitish film encasing it. This film appears when the candle is hardening in a process called “bloom”. Bloom is when the softer oils in the wax rise to the surface and natural beeswax candles usually have it. Most people like the quirk of bloom on their beeswax candles, but if you’d rather a polished color then you can use heat to wipe it off. The bloom will reappear in days or weeks, but that’s the nature of a beeswax candle.

Beeswax has been used for thousands of years, previously as a luxury, as it takes an entire hive of bees to produce an ounce of honey. Evidence of beeswax candles found in Greece and Egypt has been dated back to 3000BC. In Europe, it first appeared in the Middle Ages, used as the rich man’s alternative to the commoners candle. Candles were the only source of light, and beeswax was placed at a value only the wealthy could afford, trading the abhorred smell of burning animal fat for the light and sweet aroma of honey. Nowadays it’s used in all sorts of things- skin care, pain and itch relief, cooking ingredients, lubricants, cosmetics, clothes, furniture- the list goes on. It is incredibly versatile and often used in our everyday lives.

So why make the switch? Well, that’s up to you. I find comfort in knowing that the air I breathe is as pleasant as the warmth I seek from lighting a candle. It’s hard to welcome energy when it’s accompanied with unwelcome elements, and the energy I give out is refined by what I take in. We put so much thought into making the best choices for the world around us. It’s more important now than ever that we can see the negative effects of humankind change our world. Why not give our ever changing spirits and bodies the same care?